Do you remember my post at the end of September when I showed you the old table that I had pulled from my shed.  You can click here for a few reminder photos Coffee Table .  Well, I finally got it finished and it's looking great.  I think it would be especially good in a conservatory or a sun room or great in a shabby chic style home.  I used a pale turquoise colour chalk paint after I had primed it (two coats).  It probably didn't need the primer but I wanted to make sure that the paint stuck.  I had also given it a wash down with some sugar soap and a light sanding as I mentioned in my earlier post. I chose this particular colour because of the napkins that I wanted to use for the découpage.  It's funny how you make decisions - all because of a napkin!! But, I had bought some lovely ones with the same colour turquoise background and lots of red flowers that I was just crazy about and had to use.

I've used these same napkins for one of my latest plaquettes, it's so pretty.....you can see it here.  I'll have to stop now though, I can't keep using them for every job!!  After the table was painted, découpaged and aged a little, I gave it two coats of matt varnish.  Normally I wouldn't do this, I would just use wax but as it's a coffee table it needed to be well sealed.  I then clear waxed and dark waxed it to darken it up a bit.  In the first pic below I have photographed it with a white sheet of paper on top.  This is because a few people thought that it looked white in the photos so this might help to show up the colour more.  Here she is.................and not half as ugly.  Scroll to the end to see the before pics. 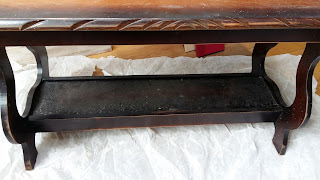 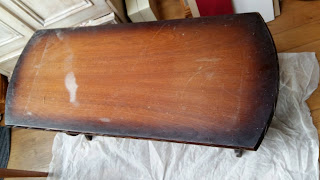 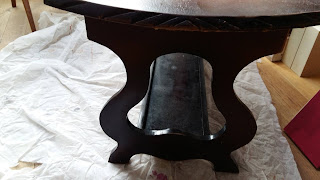 
Love Is In The Air graphic by Freepik from Flaticon is licensed under CC BY 3.0. Made with Logo Maker